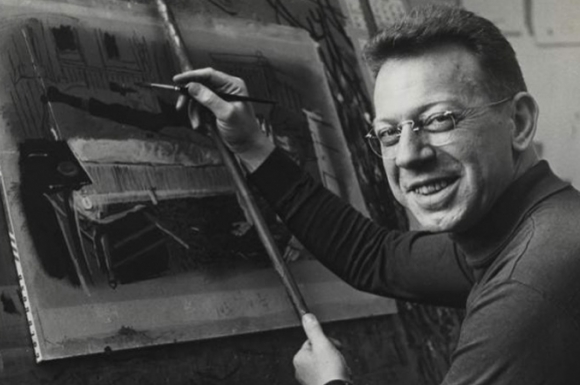 Austin Briggs’s journey began in 1908 in Humboldt, Minnesota, where he was born in a railway car, while his father was installing telegraphic instruments in the local station. He began to draw at an early age, and in high school his work attracted so much attention that he was awarded a scholarship to the Wicker Art School in Detroit. He began his career at sixteen, when an illustrator who specialized in automobile pictures took him on as an assistant. Since he was skilled at rendering the human figure, it was his job to paint in pretty girls and prosperous men enjoying the luxurious automobiles.

However, Briggs got tired of the demands of advertising work and was eager to break into story illustration. In 1932, when an art editor at Collier’s showed interest in his drawings, he packed up and moved to New York, where he enrolled at the Art Students League and took on assignments, all in pen and ink, for Collier’s and other magazines. He created illustrations for the pulp magazine The Blue Book, but was plagued with feelings of disappointment and disillusion. Finally, he turned his back on the drawing board for six months and traveled around Quebec’s Gaspé Peninsula on the Saint Lawrence River, where he spent his time painting and thinking. By the time he returned, he had realized that an illustrator needs not only to master his craft, but also to live, to pile up experiences and become aware of the infinite aspects of our world.

With this new outlook, taking on each assignment as a personal experience and solving problems in his own way, without referring to other artists’ work, he began to build his career. He created illustrations for top magazines such as Redbook, Cosmopolitan, and The Saturday Evening Post, and also drew the popular comic strip Flash Gordon.

Briggs was especially known for the great subtlety and sensitivity of his drawing with a lithography crayon, charcoal, or similar tools. He was at the forefront of artists introducing a more realistic informality into illustration. Previous illustrators focused on the one key moment or reaction shot, where the subject's eyes were widest or their expression was the broadest or their leap was at its height. Briggs took a different approach and began focusing on moments that looked less staged. His sketches reveal a deliberate search for offbeat moments, where a subject might be looking away or checking his watch or other things more integrated into daily life. Briggs was a bold and principled pioneer who left the field with more artistic freedom than it had when he began.