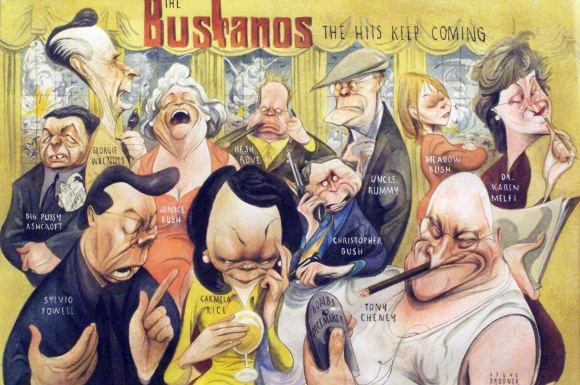 Artists have always been called upon to create likenesses of celebrated people—the rich, the powerful, the revered, the cherished, the notorious, the talented, and the influential. Emperors and government officials, wealthy merchants, royal families, military heroes, and religious leaders have been portrayed by artists since the dawn of recorded history.

Since portrait art is always accomplished in the fashion of the time and culture in which it is created and interpreted through the eye, hand and mind of the individual artist, it is a lens through which we can observe both the public’s and the artist’s perspective regarding particular celebrities.

In the early 18th century, especially in France and England, satirical prints (hand-created engravings, etchings and lithographs) portrayed a wide variety of topics, events and human foibles across the class spectrum. These depictions were sold in small print shops and street stalls. With the advent of increasingly efficient reproduction and distribution methods in the 18th century, mass communication was born, allowing celebrity portrayals, including social and political caricature, to reach wider audiences through newspapers and satirical journals intent on expressing editorial opinion.

Artists were employed by these publications to represent the likenesses and behaviors of well known public figures as seen through critical eyes focused on current news and events and the political, social, and legal systems of their time. The art of caricature became firmly established as a tool to generate critical thinking and sway popular opinion about specific people and the issues concerning them.

Portraiture relies on achieving a likeness and uses clues to accomplish that recognition, with body type, facial proportions, hair style, stance, props, environment, and costume all contributing to an understanding of what makes for a singular personage. Satiric or caricature artists use exaggeration as their primary tool. This art, different from traditional portraiture, seeks to show likeness through often extreme exaggeration of physical features, while at the same time using various pictorial information to examine or criticize the subject’s motivations, actions, or ideas.

Celebrity portraits by illustrators are not necessarily intended to caricature their subject, but they will reflect the artist’s style and, potentially, any opinion they wish to express about the person or the way they look. This type of illustration has been a popular feature in American and European publishing since the early 20th century. It continues to be enjoyed by the public on the pages of magazines like the New Yorker, Vanity Fair, and Rolling Stone, and in newspapers and their supplement sections like The New York Times Book Review.

Caricature and illustrated celebrity portraiture is a world-wide phenomenon—an indication that while we may revere or revile a person of notoriety, we most enjoy seeing them through the eyes of an interpretive artist, rather than in photographic reality.